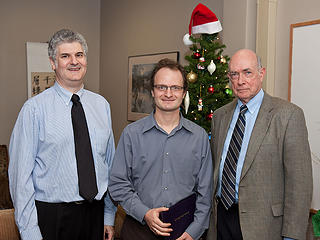 Carrying a cash prize of $1200, the Award was established through an initiative of the LSU Faculty Senate during the presidency of Professor Claire Advokat.  The LSU Foundation Endowment Agreement appears at https://www.math.lsu.edu/~mcgehee/MFund.pdf . The Award is for a tenured Associate Professor in recognition of a specific work, and will rotate among the three areas of mathematics, humanities and social sciences, and natural sciences.

In Fall 2009 the Award went to Associate Professor of Mathematics Milen Yakimov for his paper "Symplectic leaves of complex reductive Poisson-Lie groups" in the Duke Mathematics Journal.  The paper is a milestone in Poisson-Lie groups, a field that combines algebra, geometry, and mathematical physics.  The paper resolved a seventeen-year-old problem, impacted several fields of mathematics, and introduced techniques and arguments that have become standard.  One reviewer wrote, "I have no hesitation to call it a masterpiece."

Originally from Bulgaria, Milen Yakimov received his Ph.D. from UC Berkeley.  He has been a Sloan Fellow, a Clay Liftoff Fellow, and a Kavli Fellow.  Prior to joining the LSU Mathematics Department, he held faculty positions at Cornell and at UC Santa Barbara.

In accord with the endowment agreement, the selection committee consisted of the department chairs from Mathematics, Physics and Astronomy, Psychology, Biological Sciences, and History, with one additional member from Mathematics.  This year the committee comprised Professors Larry Smolinsky, chair, Michael Cherry, Robert Mathews, Marcia Newcomer, Victor Slater, and James Oxley.