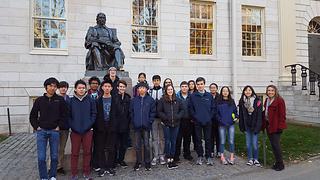 The LSU Math Circle Competition Team traveled to Boston in November to compete in HMMT, the Harvard-MIT Mathematics Tournament. Held alternately at Harvard and MIT, HMMT is one of the most prestigious high school mathematics competitions in the United States; over 800 top math students from around the globe, including China, Brazil, and Honduras, travel to Boston each year to compete. The tournament consists of two 50-minute individual tests, which require knowledge of subjects like geometry, algebra, and combinatorics, and two team rounds: a challenging 60-minute team test and an 80-minute speed-based "guts" round.

The Math Circle A team received 48th place overall out of 147 teams, placing them in the top third of all competitors! The Math Circle B and C teams also scored highly, with the B team coming in at 97th and the C team at 119th. All but four of the 18 students were first-time competitors, and with only four graduating seniors across all three teams, all of the remaining students plan to return to HMMT next year.

After sending the first-ever Louisiana team to HMMT in 2012, LSU has sent teams every year since, with consistently high levels of success: in 2015, the Math Circle A team received 18th overall out of 127 teams. The team continues to practice at LSU every Sunday in preparation for their next tournament, the Berkeley Math Tournament, in March 2017.