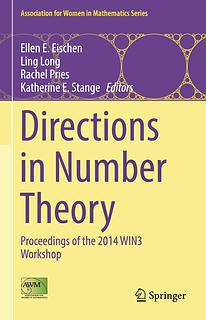 Professor Ling Long is one of the editors of the book Directions in Number Theory as part of the Springer Association for Women in Mathematics series.

The book is the Proceedings of the 2014 WIN3 Workshop, i.e. the third Women in Numbers Workshop at the Banff International Research Station in Banff, Alberta, Canada, April 21-25, 2014.