Skip to content
Published on LSU Math (https://www.math.lsu.edu)
Home > Classroom on a Cart

Classroom on a Cart

This is an overview of equipment needed to construct a simple "virtual classroom on a cart," allowing the sharing of a classroom setting to an online audience.

There exists a technical limitation regarding the audio setup: Nearly all conference software (Skype, Zoom, Vibe) limit the audio device selections to exactly one input device and one output device. This requires that either one microphone be used, or a mix-down provided to the software.

Presented here are three choices for design, aimed at meeting different balances between complexity, cost, style of local interaction, and audio quality. With a higher audio quality and interaction capability, the cost and complexity of the setup increases. 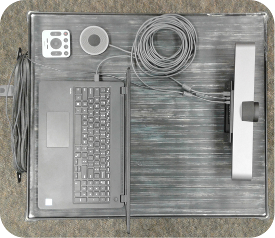 This setup uses the Logitech webcam for video capture, and uses the camera's built-in speakers and microphone for audio. The laptop and webcam should be positioned properly in the room to allow the webcam to capture the presentation area, such as a whiteboard. The webcam attaches to the laptop via the USB connection. No special configuration of the camera is required, though different resolutions of video capture can be set by the conference software as desired. If needed, the webcam's add-on microphone can be attached and placed on a surface behind the setup to capture additional audio from a local audience. 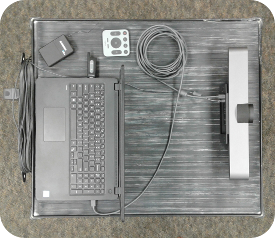 Similar to Style 1, however, the audio-input device is swapped from the Logitech webcam's built-in microphone to the Samson lapel mic. The lapel mic connects to the laptop via the USB receiver, requiring that laptop to now have two USB ports.

This setup provides a higher audio quality for the presenter's voice. The lapel mic's input-gain can be adjusted to better suite a soft voice without then picking up too much room noise. Since the microphone is worn by the speaker, there will be little change to the audio volume as the speaker faces in different directions. Additionally, a mic worn by the speaker will pick up no room echo, and little or no extraneous room noises. 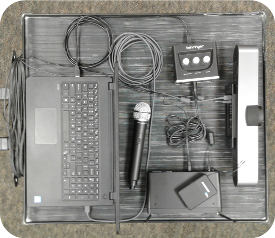 This style adds complication and cost for the ability to have two microphones. The Samson 288 base station operates two wireless microphones simultaneously. This allows both a wireless lapel (or headset) mic to be worn by the speaker, and for a handheld mic to be passed around in the room. The handheld mic has a "mute" button that can silence its input when not in use.

A greater level of local-audience interaction can be had by allowing the hand-held mic to be passed around the room. Extended conversations or question-and-answer sessions can be held without the need for the presenter to repeat all audience statements, or to have remote participants limited to hearing one side of a two-sided exchange.

As of this writing, there is no dual-mic wireless base station with a USB output. Therefore, a consistent method of connecting the Samson Concert 288 base station to the laptop is required. The Behringer U-Phoria UM2 USB sound card allows this by accepting the audio output from the Samson 288, and then offering a USB connection to the laptop. Since this setup is more complicated, brief setup suggestions are given further below

The Samson 288 base station requires configuration and setup before the first use. Pairing the devices to the base station may be required

The same benefits regarding audio quality of a worn mic over an open mic (reduced echo, more consistent volume), as listed under the "Style 2" section, apply to the presenter and to the audience using the handheld mic. As mentioned, the handheld mic provides an ability to have audience participation with a higher audio quality than using an open mic placed in the room.

More equipment is required, at a greater cost. The complication of the equipment setup is higher, leaving room for confusion and error. Since two mics will be in use, a mix-down of the two audio signals into one audio signal is required. This then requires that the relative volume of the two mics be adjusted correctly before the presentation and possibly as-needed during the presentation. More time should be allotted for setup and testing before a presentation. A second USB port on the computer is required. Both the wireless pack worn by the speaker and the hand-held mic require batteries, so a supply of AA batteries will be needed. The presenter will be wearing a visible mic.