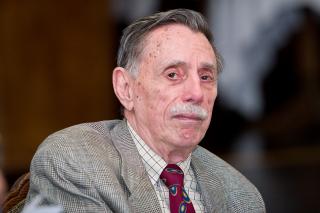 Robert J. "Bob" Koch, LSU Math Professor Emeritus and AMS Fellow, passed away on Tuesday, August 11, 2020 at the age of 94. Bob Koch joined the department in 1953, until his retirement in 1989. In 2013 he became part of the Inaugural Class of AMS Fellows.
At LSU he supervised the Ph.D. theses of ten Ph.D. graduates, including Dennison Brown, who later became the Ph.D. advisor of Jimmie Lawson at the University of Tennessee. In 1986 the math department hosted the LSU Semigroup Conference Kochfest 60 in Bob Koch's honor.