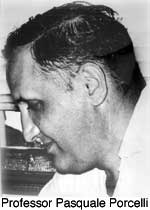 The Pasquale Porcelli Lecture Series in mathematics is an annual event in which a prominent mathematician is invited to deliver a series of three lectures on recent advances in an area of mathematical research. The topics and the level of the lectures are carefully chosen to appeal to a broad audience from various academic disciplines. Everyone is invited to attend! The Lecture Series is funded by the family of Pasquale Porcelli, who was a mathematics professor at LSU from 1959 until his death in 1972. Porcelli was made Boyd Professor—the highest LSU rank—in 1965. Two of Porcelli's LSU doctoral students became Sloan Fellows after graduating from LSU. The past speakers at the Lecture Series include: