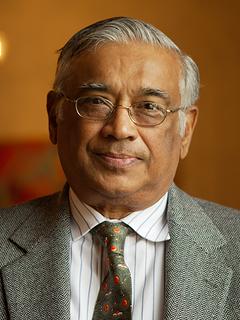 The 2013 Porcelli Lectures speaker is Professor S.R. Srinivasa Varadhan of the Courant Institute for Mathematical Sciences at NYU.

Professor Varadhan was awarded the National Medal of Science in 2010 and received the Abel Prize in 2007.

In probability theory, we often have to estimate the probabilities of various events. If they are not too small, we can try to approximate them. But sometimes they are very small and it can be important to know exactly how small they are. For example, in calculating conditional probabilities that are ratios, the conditioning event can have small probability. We are then looking at ratios of two small numbers, which may or may not be small.

Often we have a large system whose behavior is specified through local interactions. We may be interested in understanding their large scale consequences. We will examine some examples of this.