Louisiana State University, founded in 1860, has an enrollment of approximately 30,000 students (more than 5,000 graduate students) and some 1,300 faculty members. It is classified as a Doctoral Research University Extensive by the Carnegie Foundation - their highest category. With more than 250 buildings, the 2,000-acre campus is bordered on the north by shopping streets, on the east and south by University Lake and residential areas, and on the west by the Mississippi River. 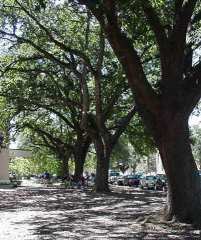 The campus is noted for its many live oak and magnolia trees and an architectural style based on the Renaissance domestic style of northern Italy (tan stucco walls, red tile roofs).

Near Lockett Hall, which houses the Department of Mathematics, there are the LSU Campus Mounds. These are ancient earthworks made by Native Americans thousands of years ago.

The 2.7-million volume LSU Library currently subscribes to about 300 mathematics journals. Students often gather informally in the quadrangle in front of the Library.  The Department and the Library jointly provide electronic access to MathSciNet, the electronic version of Mathematical Reviews. 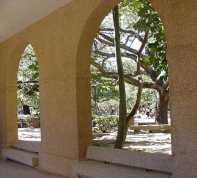 Within the Mathematics Department is a private computing lab for the use of instruction and specialized mathematics research software, such as Mathematica and Matlab.  The local network supports a heterogeneous blend of Linux workstations, Windows clients, and Macintosh computers, as well as a 32 node Beowulf computing cluster, Access Grid video collaboration environment, and three floors of multimedia equipped classrooms.  The Mathematics Department works closely with LSU's Center for Computation & Technology (CCT) and Information Technology Services (ITS) departments, who have just completed the construction of a new campus supercomputer through joint efforts.  General access computers are located around campus including many residence halls, the student union, and the LSU Library.

Students will find excellent facilities for theater and concert activities. Many University productions, guest artists, road shows, and popular entertainers are booked each year. The city of Baton Rouge supports a symphony in its modern riverside theater complex known as the River Center. The university supports its symphony and an opera series on campus. In addition, the many night locales offer a wide variety of bands and vocalists, and the University sponsors a film series. 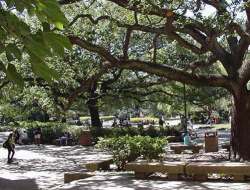 The sports facilities for intercollegiate competition and campus recreation at LSU compare favorably with those at any major university. There is an extensive intramural program, and the math department fields teams in basketball and softball. There is a large recreational sports center on campus for students' enjoyment and good health.

The city of Baton Rouge, capital of the State of Louisiana, has a metropolitan area population of more than 500,000. The city is home of the fifth largest port in the United States. Baton Rouge has many fine restaurants, while for regal entertainment and world-famous cuisine, New Orleans is only an hour and a half away via Interstate 10. Houston is five hours west of Baton Rouge.

The Louisiana countryside provides many opportunities for bicycling, picnicking, and canoeing. Well-preserved plantation homes offer interesting sightseeing. There are wildlife sanctuaries, horse-racing tracks, hunting, and fishing. Baton Rouge is located on the edge of Cajun Louisiana, where French is still spoken and cooking is a fine art practiced in many restaurants great and small.

The weather is semi-tropical. Midsummer daily maximums are generally around 92 degrees Fahrenheit, the humidity is high, and afternoon showers can be expected. These showers are usually preceded and followed by sunshine. On the other hand, winter weather usually lasts no more than a month, with daily minimums in the forties and occasional overnight freezes. Fall and spring weather last for extended periods, bringing out joggers in droves. Annual average rainfall is a moderate 54 inches.  Drinking water comes from deep artesian wells and is very pure.

LSU has seventeen residence halls, 184 apartments for single students in East Campus Apartments, 161 apartments in West Campus Apartments, and 578 apartments for married students in the Nicholson and Edward Gay Apartments.  Most residence halls provide computer labs and access to wired network connections that are available by subscription in each room.  Free city bus service and a late night shuttle service are provided on campus to many of the areas where students live.