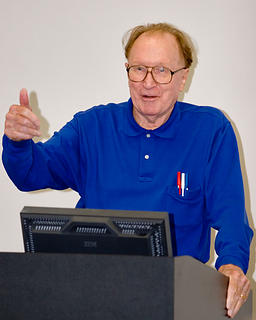 Born February 17, 1922, in Hamden, Connecticut, Richard Davis Anderson Sr., 86, died Tuesday, March 4, 2008, at Our Lady of the Lake Regional Medical Center. He was a loving husband, father and grandfather. He married Jeannette Olliver in Nashville, Tennessee, on April 12, 1943. He was a resident of Baton Rouge for almost 52 years.

Dr. Anderson attended the University of Minnesota and received his bachelor's degree in mathematics in two years at the age of 19. He interrupted his graduate education to report voluntarily for duty the day after the Pearl Harbor attack, and ultimately served in combat in the Pacific as a junior officer of the U.S. Navy. He returned to graduate study at the University of Texas after the war, and earned his Ph.D. in 1948 under the direction of R. L. Moore. Thereafter, he took a position at the University of Pennsylvania from 1950 to 1956, spending a couple of those years at the nearby Institute for Advanced Study in Princeton, where he met Albert Einstein, who was a member of the Faculty. In 1956, he accepted an appointment at LSU, where he held the title of Boyd Professor of Mathematics from 1959 to 1980 and then Boyd Professor Emeritus.

Dimensional ideas and questions rapidly attracted Dr. Anderson's interests as a researcher, as a perusal of his publications show. While at LSU, Dr. Anderson became intensely interested in the study of infinite dimensional spaces. The intuition and tools that he was able to develop led him in the 60's to his most famous result: a positive solution to an old problem of Banach and Mazur. This result asserted that two quite differently defined infinite dimensional spaces, namely Hilbert space and an infinite product of lines, were topologically equivalent. It was primarily this result that led to a whole new research area: infinite dimensional topology. The first international conference on this topic was held at LSU during the 60's, funded from grant money the Mathematics Department obtained as one of four university departments chosen by NSF for a center of excellence grant. Dr. Anderson was invited to speak on this topic at the International Congress of Mathematicians in 1970. Two of his outstanding students at LSU, Jim West and Tom Chapman, received similar invitations at the following two congresses in 1974 and 1978. In 1981 Dr. Anderson was awarded the Bolzano Medal by the Czechoslovakian Academy of Science in recognition of his achievements.

After serving as chair of the NSF Advisory Panel on Mathematics, Dr. Anderson served as vice-president of the American Mathematical Society (AMS) in 1972-73. He was also very active in the Mathematical Association of America (MAA), reflecting his keen interest in and commitment to teaching. Indeed he was chosen for the Award for Distinguished Service to Mathematics by the MAA in 1978 and served as MAA President in 1982. He was one of only seven mathematicians in the twentieth century to span this chasm and hold such high offices in both the AMS and MAA.

Dr. Anderson also devoted himself to the welfare of his adopted home state, serving from 1981 to 2004 as senior advisor to the Louisiana Systemic Initiatives Program, funded by the National Science Foundation to improve education of K-12 pupils in mathematics and science. He was often heard to praise the achievements of Louisiana schoolchildren taught by teachers trained as a result of LaSIP's efforts, which became a model for programs pursuing the same goals across the nation.

He is survived by three children, Dr. Richard D. Anderson Jr., of Los Angeles, and Dr. Charlotte M. Hollman and David M. Anderson, both of Baton Rouge; and six grandsons, David, Peter and James Hollman, and Michael, Stephen and Eric Anderson, all of Baton Rouge. He is also survived by three children-in-law, Judith Anderson, Dr. Jay Hollman and Stephanie Anderson; by his twin brother, John L. Anderson, of Chattanooga, Tenn.; his sister, Dottie Antman, also of Chattanooga; and by two sisters-in-law, Norma Anderson, of Chattanooga, and Beverly Anderson, of Minneapolis. He was preceded in death by his loving wife of almost 62 years, Jeannette Anderson; and two daughters, Susan Courtney Anderson and Virginia Dale Anderson. He was also preceded in death by his parents, John E. and Dorothea L. Anderson; his sister, Frances Moran; and his brother, Theodore Anderson.

The video recording of the Colloquium "My Three Lives in Mathematics" that Professor Anderson gave on November 10, 2005, is available for viewing.