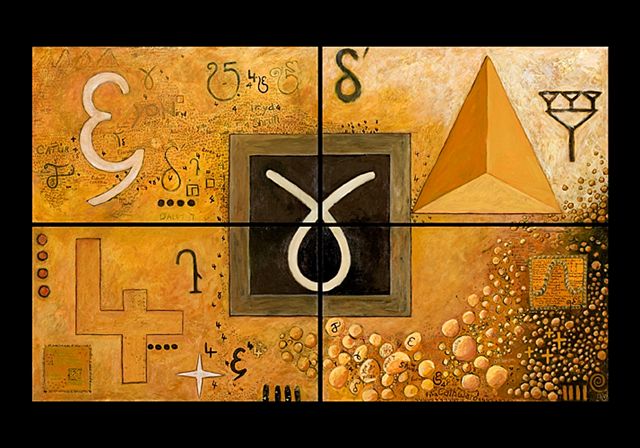 Four panels make up the Number 4 painting. In the center is a square (4 sides) with one of the Arabic Glyphs for “4”. There are 4 Noble Truths in Buddhism: in this piece, I see these 4 truths in the panels:

Upper Left
Suffering Exists (I see all the words and glyphs for the # 4 as being the constant chatter in our heads … the absence of quiet space)
Upper Right
Suffering Arises from Attachment to Desires (the 4-sided pyramid is an “object” and so represents materialism)
Lower Left
Suffering Ceases when Attachment to Desire Ceases (more quiet space, holy readings/teachings, and the allowing-in of the “bubbles” from the 4th panel …)
Lower Right
Freedom from Suffering is Possible (I see the “bubbles” as the sheer potentiality of Quantum Physics, where the space is filled with and surrounded by the # 4, but they move freely, even moving up into the material-based panel above)

None of the panels is just one thing … each has the elements of the others.

In the square in the lower left panel, the writing:

Words in different languages used in this painting: