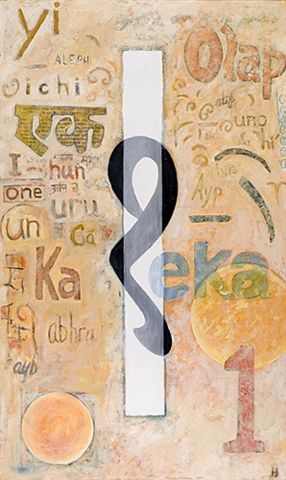 The most basic of all glyphs is the vertical line, originally a tally mark depicting a single unit. Since it also has connotations of God, a single vertical mark — centered, bold and white — was used as the first/original mark on this painting.

The sensuous Sanskrit glyph for one that overlays the white, vertical ONE mark means refined, consecrated and sanctified. Sanskrit (4,000+ years writing system), considered the “high, classical” Indian language, is used in religious and scientific applications, much as the romantic languages consider Latin to be classical and use it for religious and scientific applications. Sanskrit is the liturgical language of Hinduism, Buddhism, and Jainism.

The Sanskrit word for one, pronounced eka, in the upper left, has been filled with Sanskrit text, which is translated as:

All human beings are born free and equal in dignity and rights.
They are endowed with reason and conscience and should act
towards ONE another in a spirit of brotherhood.

This is Article ONE of the United Nations’ Universal Declaration of Human Rights.