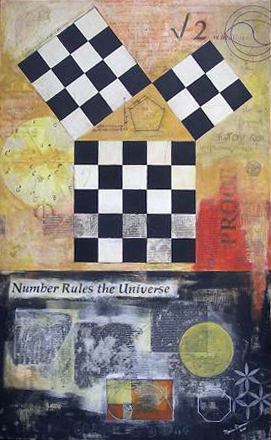 Pythagoras (569–475 BC) was a Greek philosopher who made important discoveries in mathematics, astronomy and music theory. He is best known for the Pythagorean Theorem, which is depicted as the central motif, with the word PROOF alongside it. The Babylonians knew about this theorem 1000 years earlier, but Pythagoras proved it.

He also proved that irrational numbers exist, as shown in the upper mathematical proof. Phi, the irrational number known as the Golden Ratio, is found in the relationships between the sides, the edges and the vertices of the Platonic Solids, and was considered by the Pythagoreans to be so significant that they were sworn to secrecy on the subject. When Hippasus of Metapontum (who is credited with discovering the dodecahedron) divulged the secret of the existence of the irrational, he was thrown in the river and drowned. Phi, expressed to about 20,000 places is printed to the surface in the painting.

Pythagoras discovered the mathematics in music. By dividing a string into sections, so lengths have the ratios of 2:1, 3:2, 4:3, or 5:4 (octave, fifth, fourth, third), harmonic tunes result. He was quoted as having said, “There is geometry in the humming of the strings”. In music theory, the diatonic scale, depicted on the left side of the theorem proof, is a 7-note musical scale with the pattern repeating at the octave (diatonic is translated by Greek, meaning literally “progressing through tones”).

Pythagoreans discovered the dodecahedron, the fifth regular/Platonic solid. Actually, Neolithic people of Scotland 2000 BC knew about these shapes, as evidenced by the stone carvings they left behind. However, the Pythagoreans gave the mathematical proof.