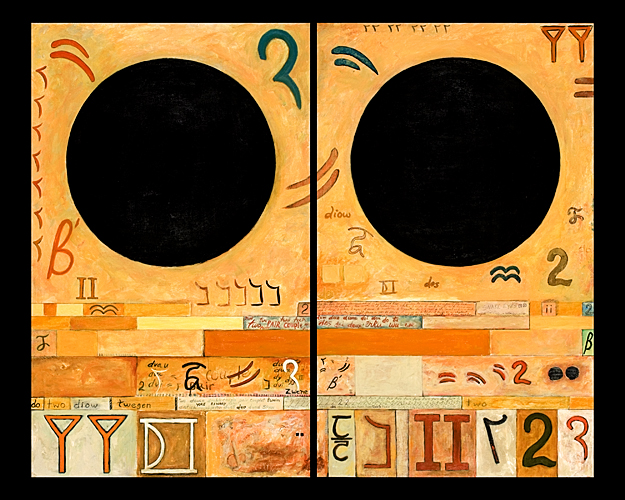 To evoke a sense of the number 2, this piece is painted on 2 panels. The 21” width and 34” height are in the Fibonacci Series of numbers, making their relationship approximating the Golden Ratio … the space is then divided into that relationship. The lower portion has strips of space that are broken down into Fibonacci Series dimensions also.

The 2 large black dots were the Glyph used by the Mayans to depict the number 2.

It is important to retain a sense of humor when dealing with all this, so included in this painting is this bit of silliness which reads: tea for two, couples, dos equis which is pretty good beer … 2 sides to every story, 2 sides of the bed which actually has four, as well as 2 halves in a whole, 2 ends to every length, and humans have 2 legs, 2 arms, 2 eyes, 2 ears, 2 nostrils, 2 breasts. The 2 of Clubs is the lowest card in the deck. If you wear a tu-tu, you might dance a pas de deux. 2 wings on a bird. 2 tusks on an elephant. A 2 is necessary for the concept of opposites. It’s the first even number.

Words for Number 2 in different languages used throughout the painting: