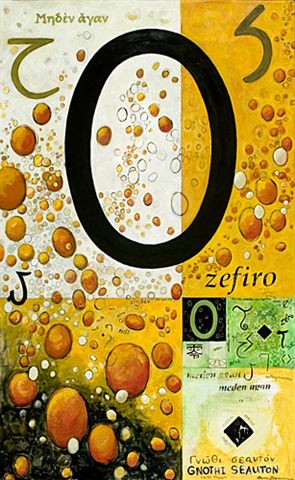 Zero has two uses … both important, but distinctly different from each other. One use is as an empty place indicator in our place-value number system. For instance, in the number 102, the zero is used simply to put the 1 and 2 in the correct “place”. When the place-value use of zero was introduced, a simple dot was used … note the diamond-shaped dot … the ancient Hindu form called the ‘bindu’.

Secondly, the zero is used as a number itself, meaning “none”, “empty” or “nothing”. Indians used the Glyph “0” as early as 640 BC. Fibonacci, the Italian mathematician who introduced the Hindu-Arabic number system to Europe around 1200, called it a “sign” rather than a number. His name for zero was “Zefiro”—from the Semitic sifr, which meant “empty”.

In the painting, the most prominent figure is of the Glyph (symbol) we use for the number zero. The glyphs in the upper right and left corners are ancient Sanskrit.

Other words which mean zero are in the painting: nul, null, nol, nula, cipher, etc.

Meden agan … Μηδεν αγαν … Greek for “nothing in excess” … the wise words of the Greek oracle at Delphi.

At the bottom right, the Greek Gnothi Seauton, means Know Thyself … it is the motto over the entrance to the temple of Apollo at Delphi.

Bottom left: In Quantum Physics, everything is in flux, a world of constant movement, a world of endless possibilities, so I have Zero’s in all sizes and shapes moving through that space … vibrating, swimming in the Akashic Field … ready to spring forth and become … what? A quantity … zero for now, but prepared to manifest.

The Zero was the most difficult to paint because as soon as a single mark was made, there was one, a mark … the only real Zero painting would have to be blank. Pulling Zero out of that blankness, manifesting it into solid form, through my focus and intention tells a story of Quantum Physics.