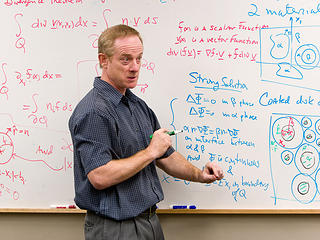 Dr. Lipton will be meeting for the first time with the collaborating researchers in May to formulate experimental and modelling designs moving forward. Dr. Lipton collaborated on a white paper in June 2018 and submitted for review to the Army Research Office. In August 2018, the team received word that they could submit a proposal for consideration for the MURI grant. The Army Research Office announced the recipients for the MURI in March 2019. Dr. Lipton has previously collaborated with the researcher from Carnegie-Mellon University, Kaushik Dayal in the Department of Civil and Environmental Engineering, on research in wave propagation in media with helical symmetry, and nonlocal models for steady state fracture.

As Dr. Lipton explains “Today, all models for particles in continuum are heuristic and do not include any bridge from particle link scales to macroscopic link scales”. This research will attempt to bridge the gap between microscopic and macroscopic particles in continuum, and the sheering effect of forces being applied to those particles. “Understanding the macroscopic effects of loads due to vehicles or fissures in geological materials, such as the San Andres fault, and applying forces to these things changes the geometry of the particles, it changes the relative spacing but it can also crush the particles. How do we link the continuum mechanics seen by the tank tread or the fault line on a macroscopic scale to the particle scale?” As time progresses, emphasis in Dr. Lipton’s research will morph from understanding simple grain geometry on elastic properties at the continuum level to more complicated shapes and inelastic properties, as well as what is the critical load for sheer based on the shapes and morphology of particles at the microscale, as well as the force applied. The impact of Dr. Lipton's research will be seen in better earthquake prediction as well as civil engineering improvements.

Dr. Lipton became interested in mathematics in high school while attending an honors physics course taught by a retired Sandia – senior level physicist. “The abstraction of physical problems to mathematical solutions and back to real-world applications is my religion…Discovery is fun. Learning how to predict something mathematically, not knowing how to do it as you go in and learning how to do it as you go out is fun.” says Lipton.