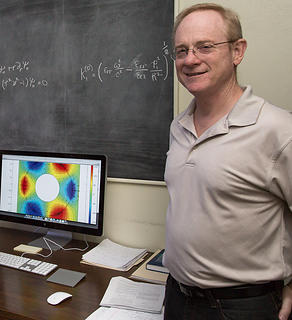 Dr. Lipton was recognized for contributions to the theory of multi scale simulation, modeling, and the analysis of media with microstructure, and for service to the applied mathematics community.

Dr. Lipton came to the LSU Department of Mathematics in 2001 from the Worcester Polytechnic Institute. He is also adjunct faculty at the LSU Center for Computation and Technology since 2010. Dr. Lipton received his M.S. and Ph.D. in Mathematics from the New York University Courant Institute of Mathematical Sciences and he credits his thesis advisor, Robert Kohn, for encouraging his interest in mathematics during his graduate studies. Dr. Lipton enjoys mentoring at all levels - faculty, graduate, and undergraduate students, who wish to pursue an education or career in mathematics. He hopes to continue to advocate, mentor, and give back to the scientific community.

Dr. Lipton admires the American Mathematical Society for being a great source for keeping abreast of the recent developments of math and science and says, “The AMS is a potent voice in the national dialogue for science, and governmental support of science. As a Fellow, it is incumbent upon you to make sure you are able to craft thoughtful and mindful messages in support of science, and in support of mathematics. Becoming a Fellow provides an opportunity to have a stronger voice and advocate in support of mathematics in the United States as a scientific discipline”.

Dr. Lipton serves on the editorial boards of five journals, and is presently the Editor-in-Chief of SIAM Journal on Mathematical Analysis (SIMA). He considers the AMS Fellow a great honor and hopes to continue to contribute to the AMS and to advance mathematics and the study of mathematics going forward. Dr. Lipton represented the AMS at the 11th annual Exhibition of the Coalition for National Science Foundation Funding at Capitol Hill in Washington, D.C. during 2005, and formerly served on the AMS Committee on Science Policy from 2006 to 2008. Dr. Lipton is cohosting a talk with his former Post-Doctoral Researcher at LSU Prashant Jha, now at the University of Texas, Austin, on Classic dynamic fracture recovered as the limit of a nonlocal peridynamic model: The single edge notch in tension on January 18th at the Joint Mathematics Meeting in Denver, Colorado held January 15th to January 18th, 2020 where he will be recognized with the AMS Fellow Class of 2020