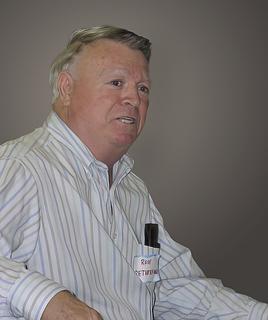 Ron completed his Ph.D. in Banach space theory at Florida State in 1963 under the direction of Charles McArthur. He joined the LSU math department that year at a time when the department was strong in functional analysis and operator theory and quickly became an important part of that group. He helped host an extended visit to LSU by C. Besaga and A. Pelczynski, two leading Polish mathematicians in Banach space theory. Ron was involved in organizing a 1967 conference in operator theory at LSU that attracted leading people from all over the world and was widely remembered subsequently. He had six Ph.D students. Probably his best-known work was a 1993 book “Hilbert space: compact operators and the trace theorem”, which was published by Cambridge University Press.

Ron was a leader in the department and was associate chair when Jimmie Lawson was chair, 1990-92. He succeeded Jimmie as chair and, after eight years in that role, he retired from the department. In Ron's time as chair, the university faced many budget problems and he worked hard to protect the research mission of the department. In addition, starting in the early 1990s, Ron played a foundational role in securing grants to guide Louisiana’s implementation of what were then the new K-12 Mathematics Standards. In collaboration with Kerry Davidson of the Board of Regents and Boyd Professor Emeritus Dick Anderson, Ron secured an initial $10 million NSF grant for five years together with significant additional funding beyond that. The professional training programs that were developed through these grants continue to have a powerful influence today.

Ron was an excellent pianist and said he had to choose between a career as a pianist and as a mathematician before he went to graduate school. Ron was well-liked and had a good sense of humor that could be self-deprecating and often helped to defuse tense situations. He is survived by his wife Pat and a daughter Stacy. His other daughter, Dana Truxillo, died in 2018.