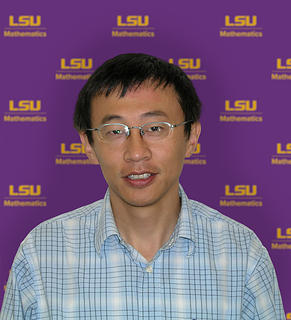 In 2013, Dr. Zhang received the LSU Rainmaker award as an Emerging Scholar, recognized for his innovative research and creative scholarship, and he received the McGehee Award for Excellent Research in 2016. He was the Industrial Postdoctoral Fellow at the Institute for Mathematics and Its Applications (IMA) at the University of Minnesota, and IBM Thomas J. Watson Research Center. Zhang received his Ph.D. from the University of Florida in 2006, his M.S. degree in applied mathematics from the Chinese Academy of Sciences in 2001, and his B.S. degree in computational mathematics from Shandong University, China in 1998. Dr. Zhang has held a joint position with the Center for Computation and Technology (CCT) and the Department of Mathematics since 2008. He serves on the editorial board of Springer’s Optimization Letters and Computational Optimization and Applications, and Journal of the Operations Research Society of China, as well as the American Institute of Mathematical Sciences Numerical Algebra, Control and Optimization.