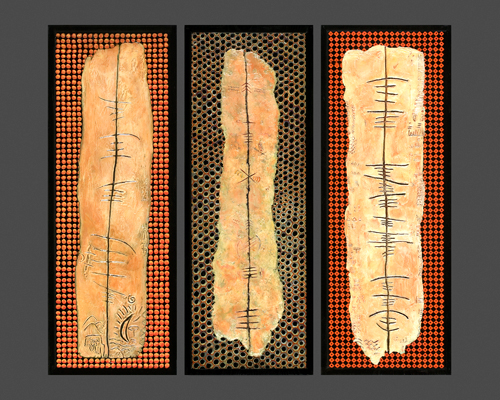 Ancient Tally Sticks and Clay Tablets that were used for accounting were the inspiration for this piece. Some glyphs are copies of ancient hieroglyphs that were actually used, some I made up. Tally sticks were used in the same way we use a tally mark now, to count up to 4, then make a mark across it to signify 5 and so on … because the human eye cannot perceive of more than 4 at one time. When tallies were made on a piece of wood, it would then be split in half, with one half being kept by the seller and one half being kept by the purchaser … to prevent either side from changing the quantities. There’s a famous painting by J. M. William Turner titled The Burning of The Houses of Lords and Commons. It depicts an 1834 fire in London that was started accidentally because they decided to burn all the old tally sticks. Charles Dickens said, “… it took until 1826 to get these sticks abolished. In 1834 … there was a considerable accumulation of them. … [W]hat was to be done with such worn-out worm-eaten, rotten old bits of wood? The sticks were housed in Westminster, and it would naturally occur to any intelligent person that nothing could be easier than to allow them to be carried away for firewood by the miserable people who lived in that neighborhood. However [the sticks were no longer] useful and official routine required that they never should be, and so the order went out that they should be privately and confidentially burned. It came to pass that they were burned in a stove in the House of Lords. The stove, overgorged with these preposterous sticks, set fire to the panelling; the panelling set fire to the House of Commons; the two houses [of government] were reduced to ashes; architects were called in to build others; and we are now in the second million of the cost thereof.”